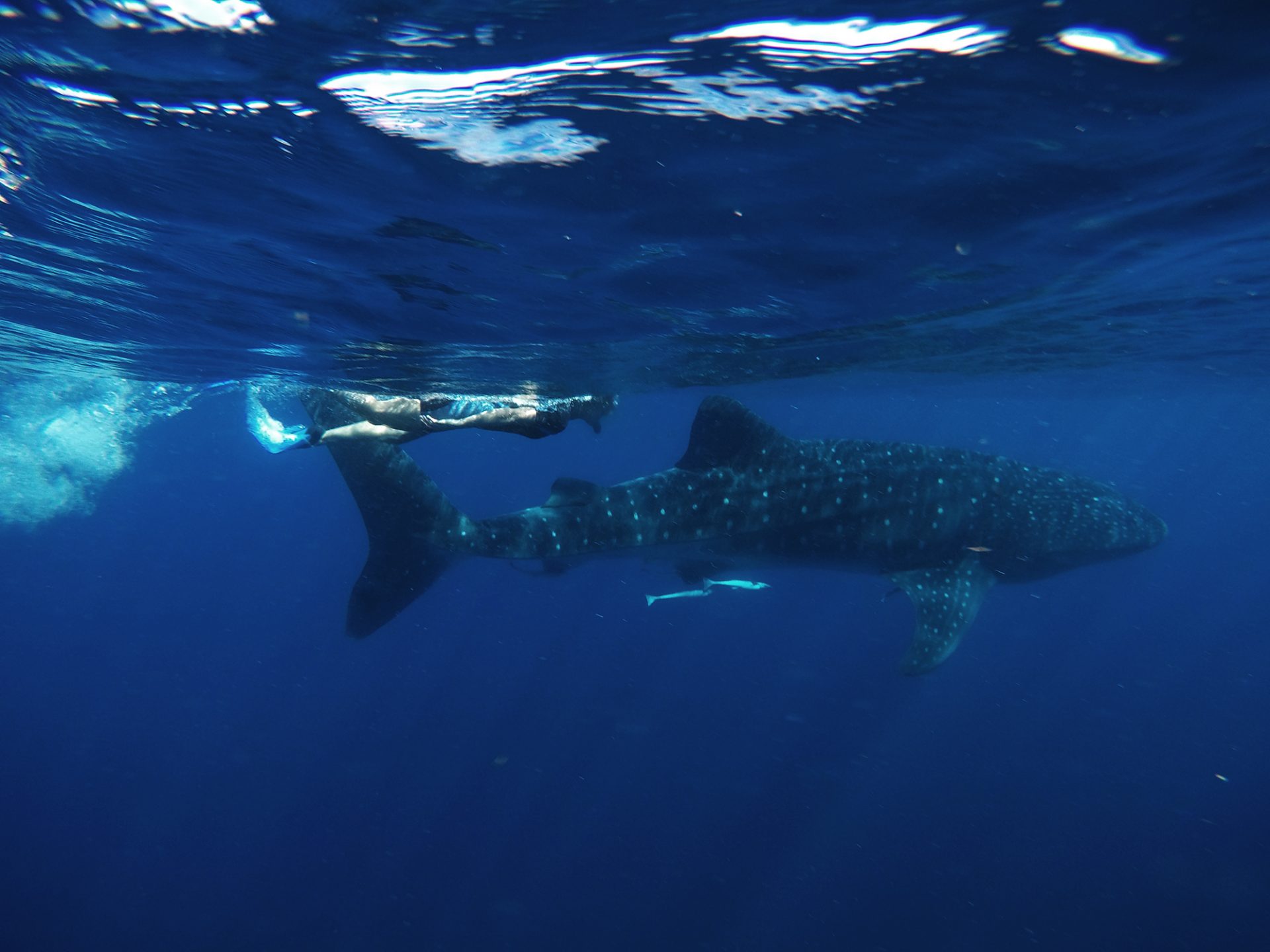 Diving, Mexico, Things To Do, Travel

If there’s ONE thing you do when you come to the Yucatan peninsula, it’s swim with the whale sharks.

The first time I saw a whale shark, it was swimming in a cylindrical tank maybe 4 times its body length in diameter at an aquarium. There was nothing else in the tank – no fake seaweed, coral, other fish friends, nothing. One one hand, it was astounding to see such an amazing and huge animal three feet in front of my face. On the other, I felt so sad for it, destined for a lifetime of swimming in circles aimlessly with nothing around at all.

When I learned years later that you could swim with whale sharks in the wild, it immediately went on my bucket list. This summer, while we were planning our first international dive trip, Mexico came up as a possible contender and with the addition of snorkeling with whale sharks, it was the winning location for our trip over the labor day holiday.

The best time to see whale sharks in Mexico is May – September. While whale sharks dive deep in most other parts of the world, the Yucatan Peninsula is one place where they come to surface annually to feed on the plethora of fish eggs in the Gulf of Mexico.

Over the last couple of decades, tons of whale shark tour companies have surfaced to bring visitors to the feeding spots of the whale sharks and give them a swim of a lifetime with these gentle giants. In years past, the whale sharks appeared near Isla Holbox but recently have changed migration patterns to be closer to Isla Mujere and Isla Contoy.

We booked our tour online with Isla Whale Sharks and stayed on Isla Mujeres, where we met our tour guides bright and early at 7AM. 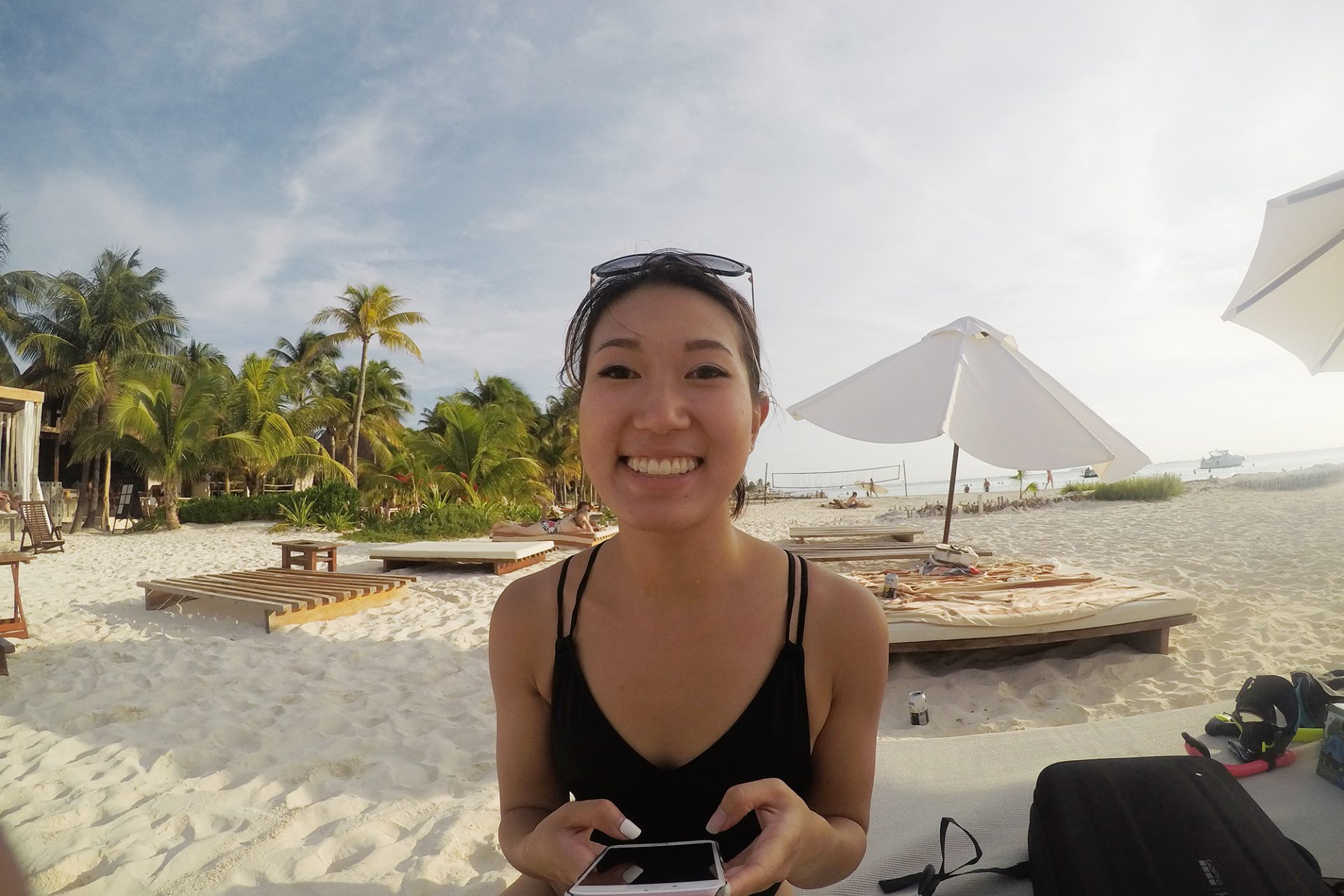 After some delicious homemade Mexican pastries and coffee, we hopped into a small boat and ventured off on our one-hour long commute to where the whale sharks were.

During our one hour boat ride, we were greeted by a pod of friendly dolphins who came by to see what we were up to, which was a pleasant surprise. 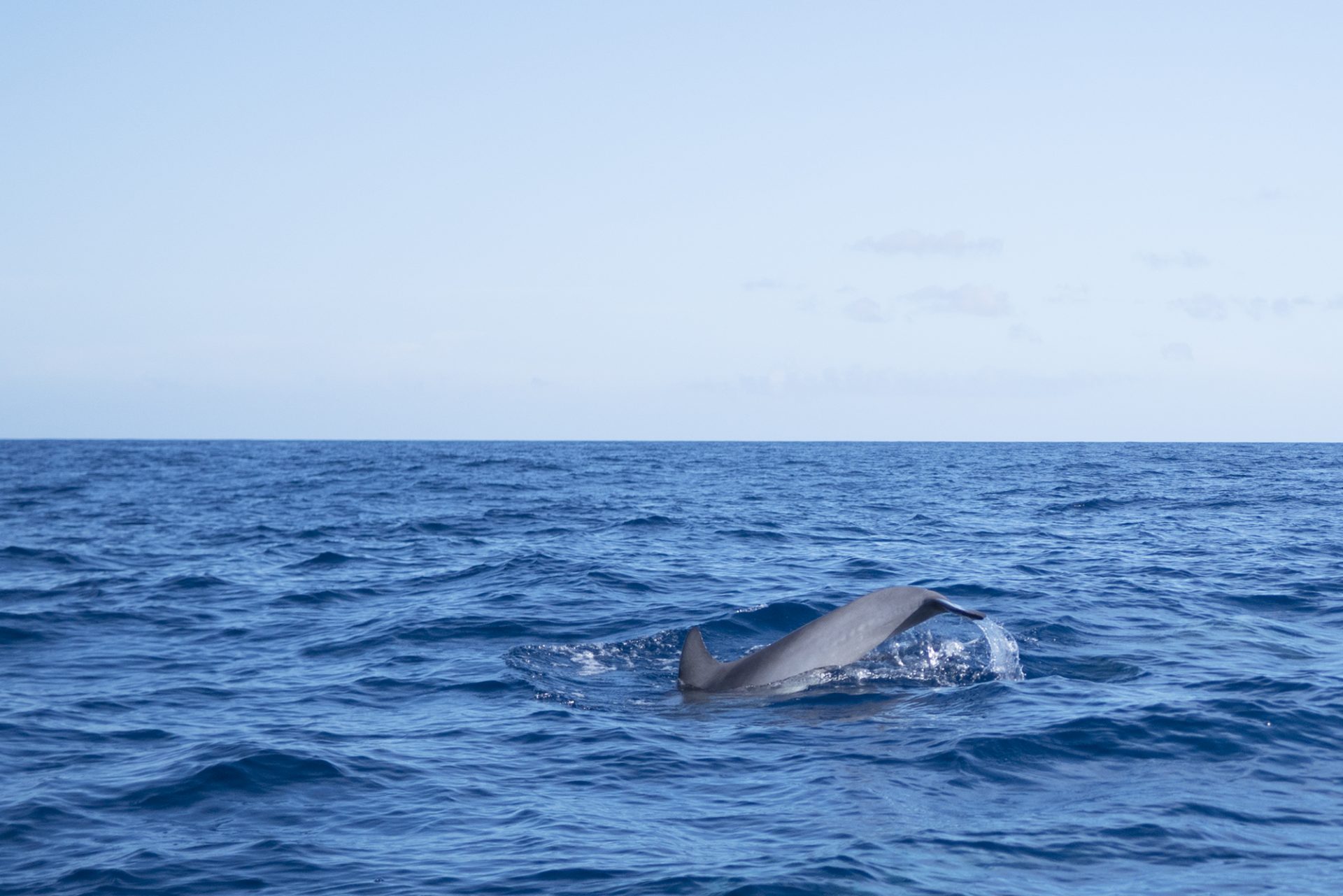 A friendly dolphin checking us out

Protip: Take seasickness medication! The ride can be very choppy, and when the boats stop for people to hop in, people tend to get VERY seasick, even if the boat isn’t moving that much. You’re on a small boat for at least 3 hours so better safe than sorry! During our excursion, only three of the ten people were left standing without nausea, and you don’t want that to get in the way of your ability to swim with the whale sharks. 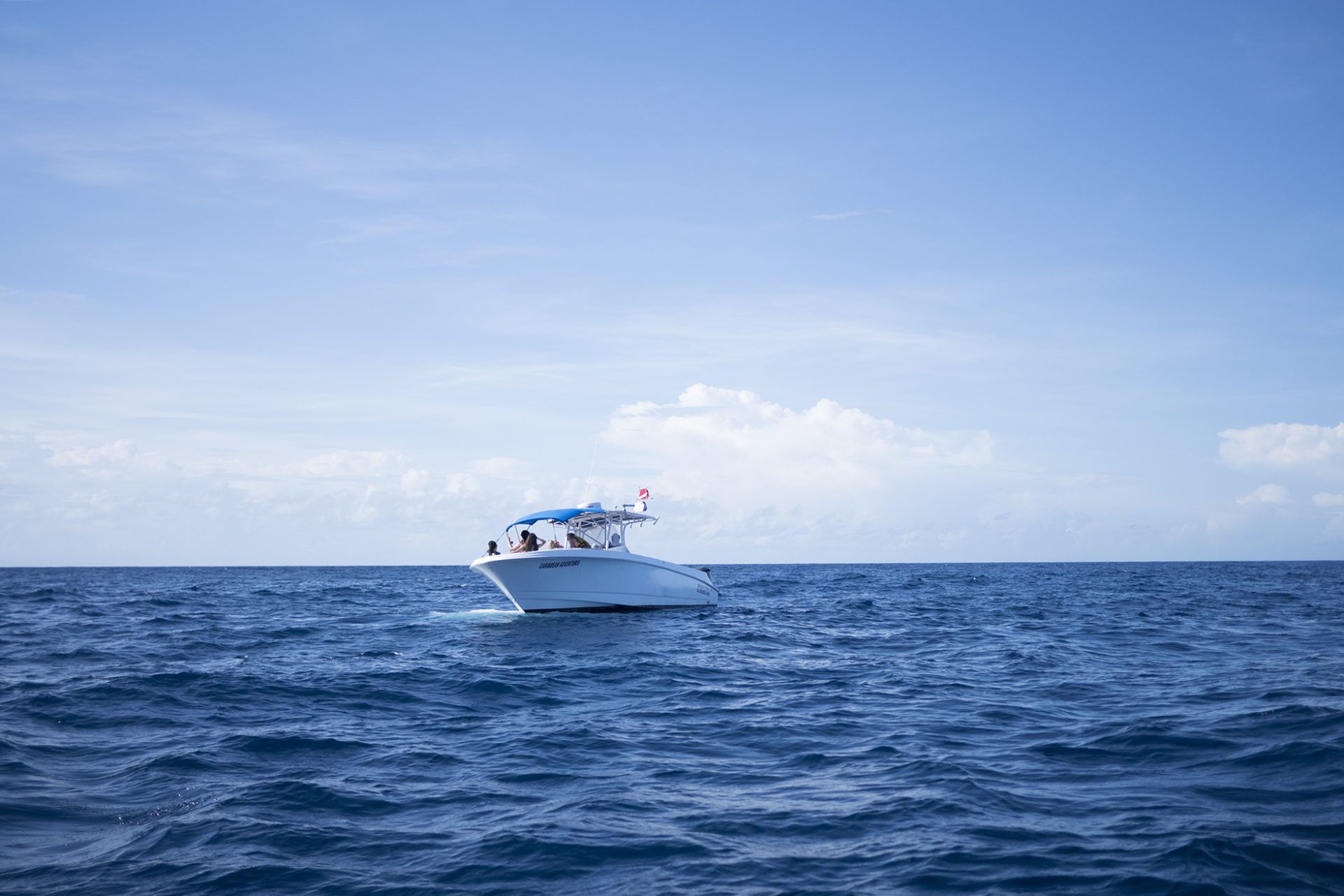 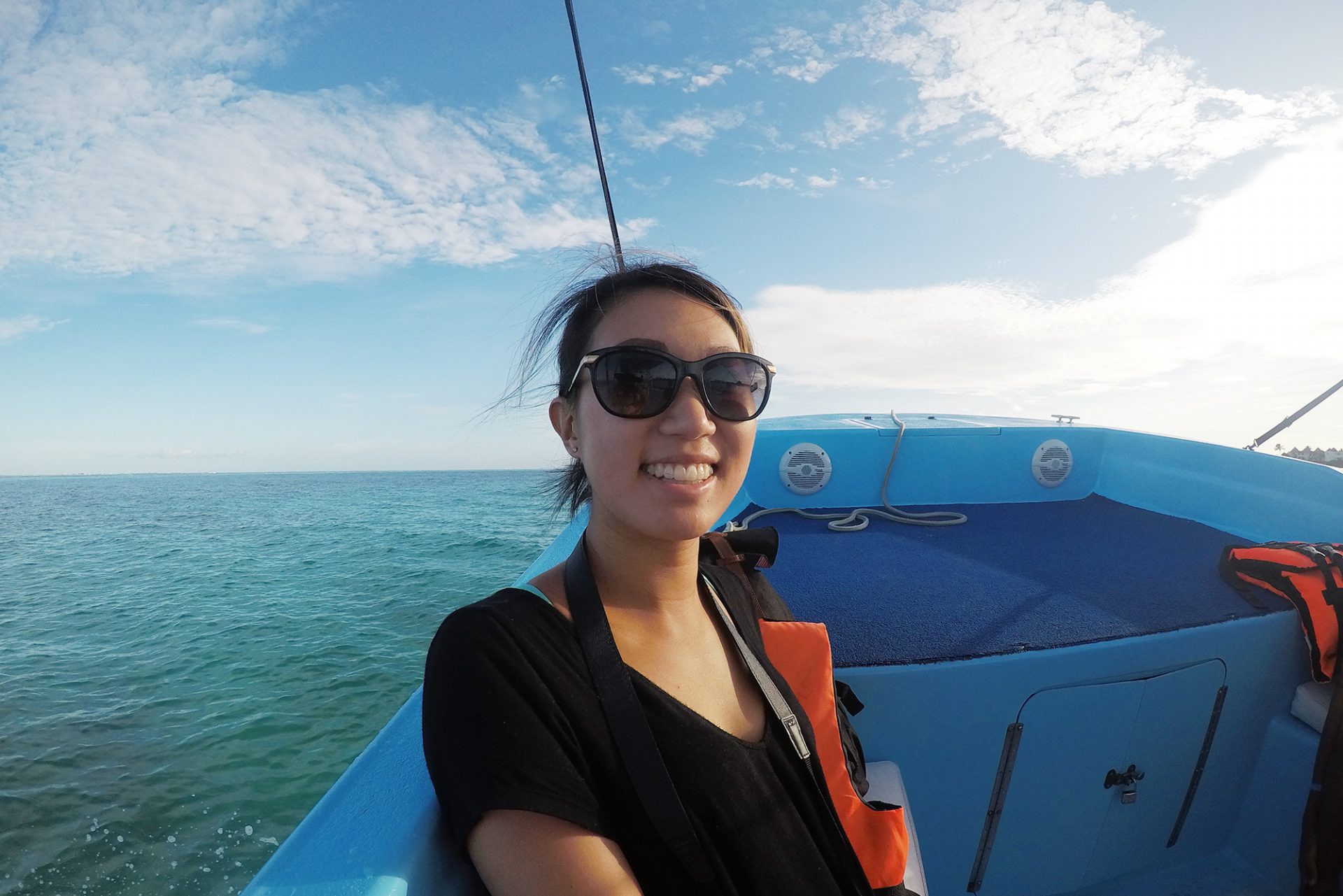 En route to the whale sharks!

We arrived shortly before 9AM and there were only 3 other small tour boats in the area. Right away we could see some of the whale sharks feasting away at the surface, their white and grey bodies standing out against the deep blue sea. 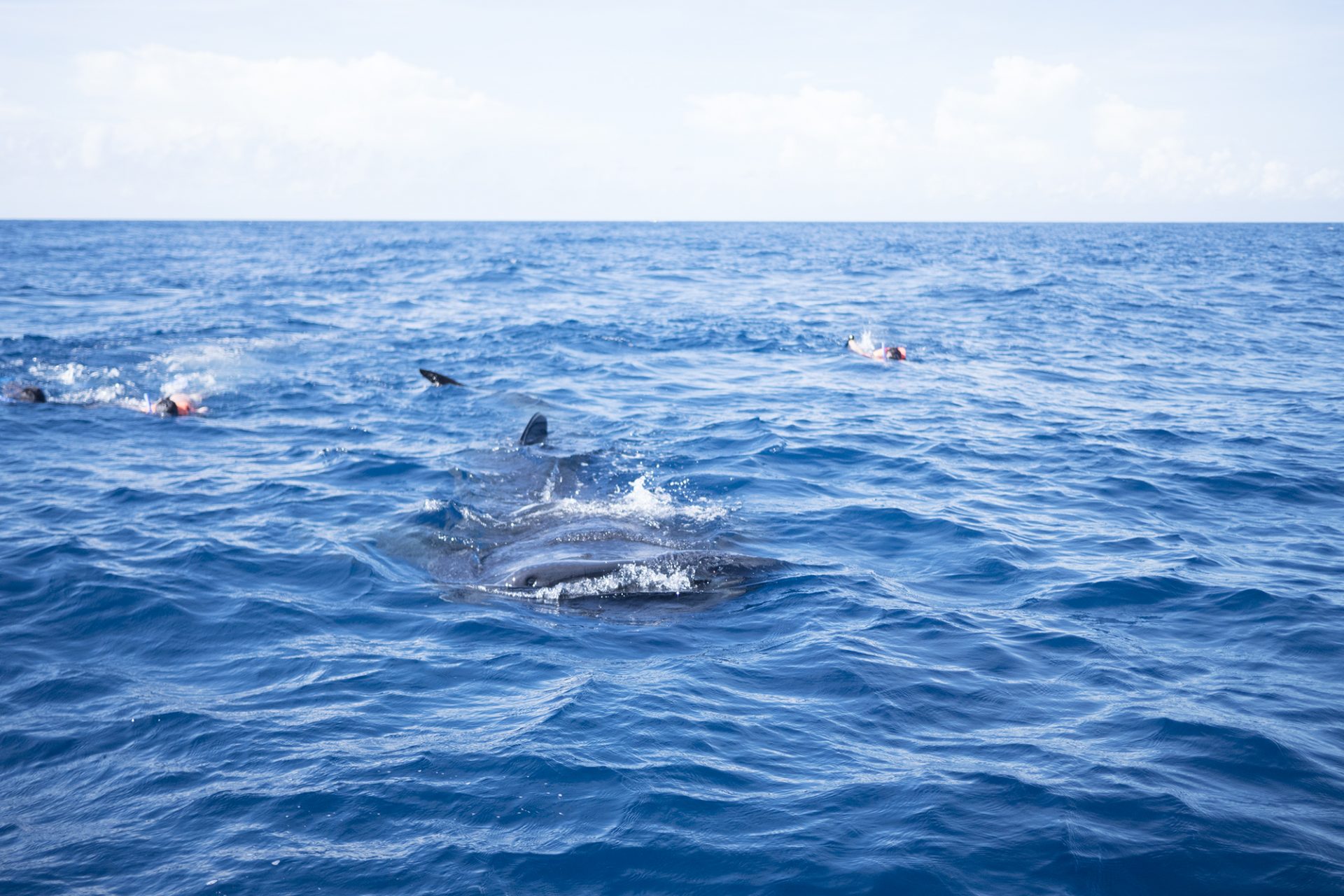 The whale sharks didn’t seem to mind the boats circling and people jumping in to swim next to them as they swallowed up gallons of sea water and food.

Each boat can have up to 10 people, and only 2 at a time can be in the water with each whale shark. When it was our turn, the guide had us put on our snorkels, fins, and life jackets before screaming “LEFT SIDE!” indicating which side of the boat to hop off of into the ocean where an oncoming whale shark would greet us. 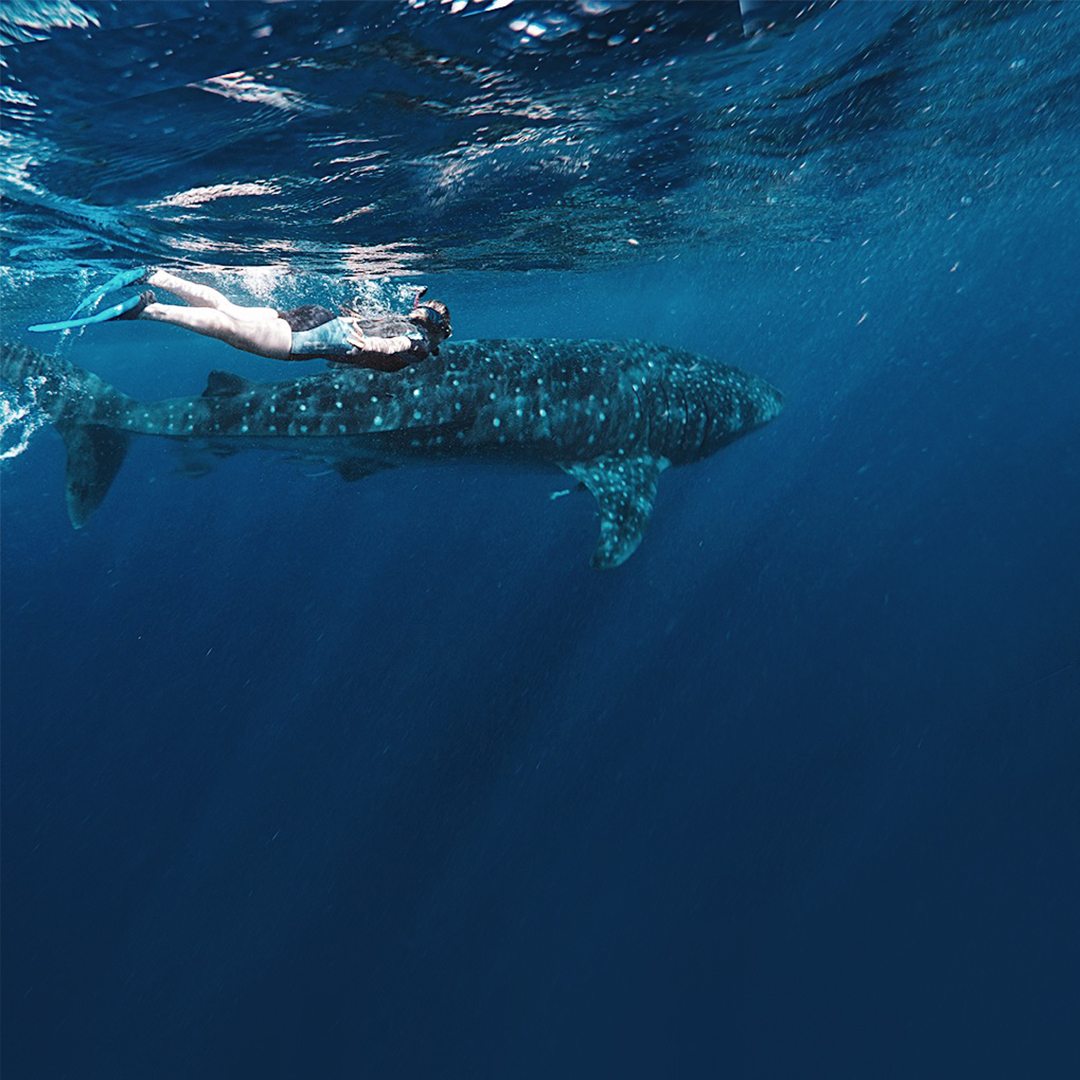 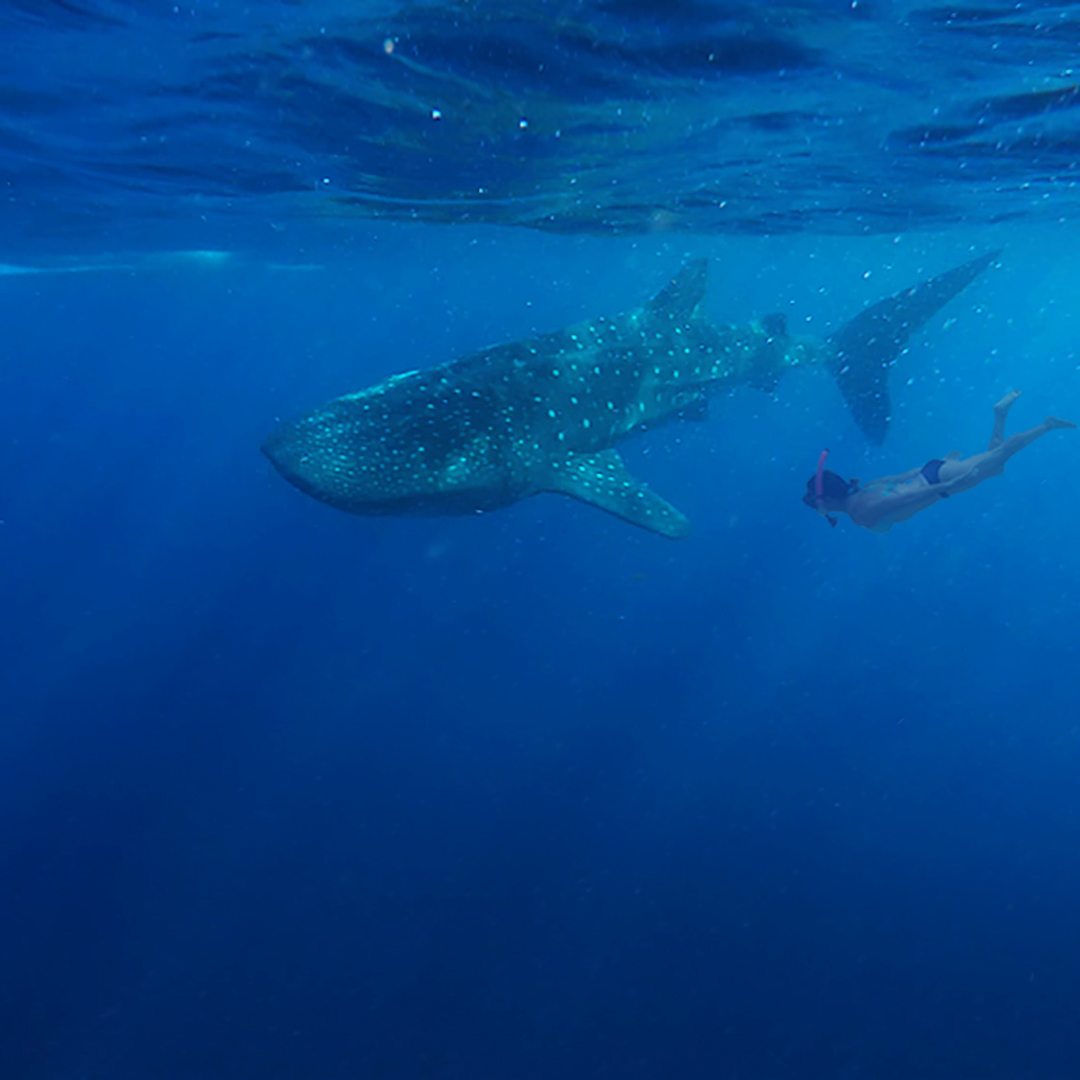 That first moment when I hopped into the water and saw this gigantic animal gracefully swimming towards me was insane. It’s a moment where you feel so small and immediately appreciate everything around you – especially the the privilege that is being able to swim alongside one of these beautiful animals. 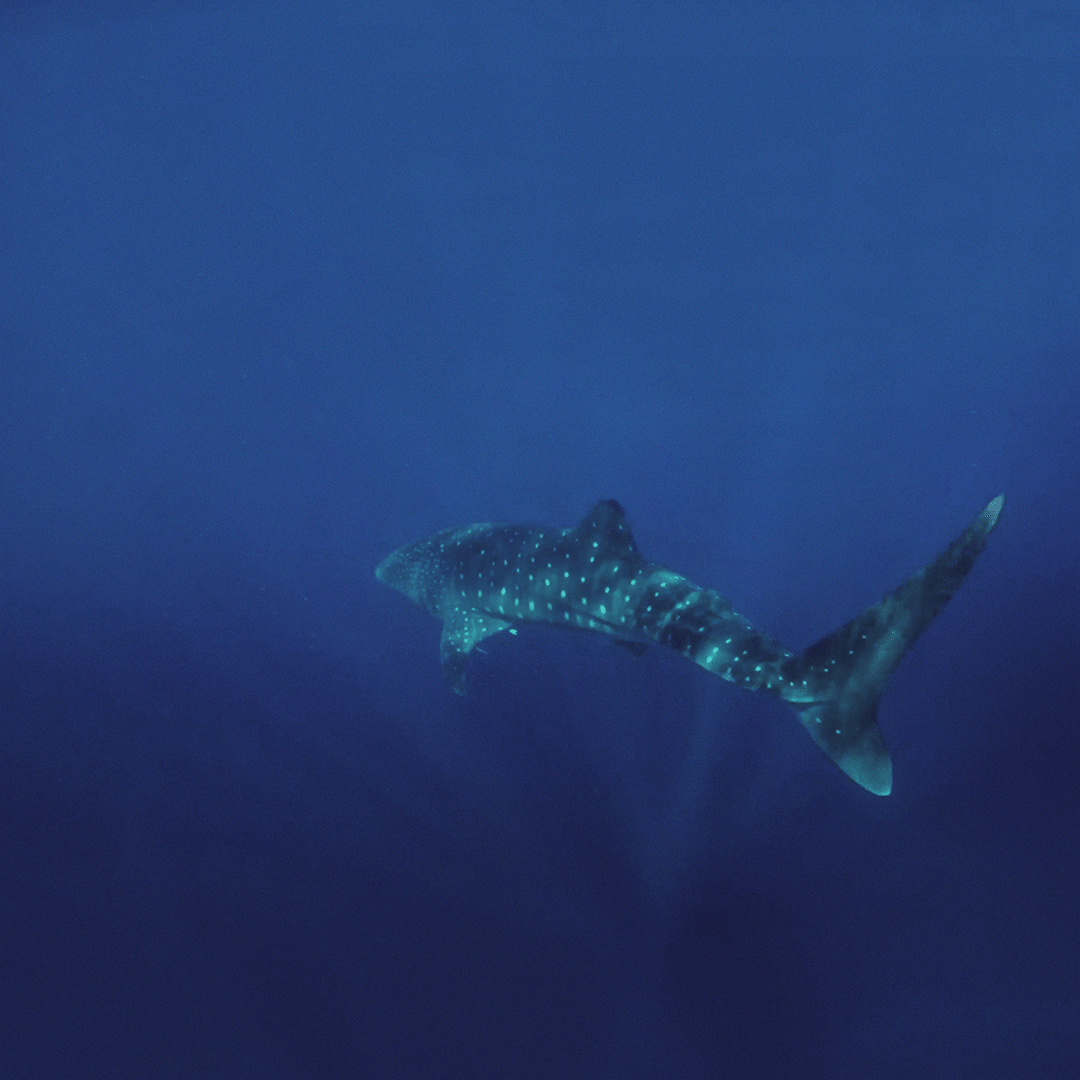 The smallest whale shark we saw was probably about 15 ft long, but the biggest guy was probably at least 35 ft in length! The peaceful giants effortlessly glided through the ocean water as people hopped in one by one, savoring each minute they had to swim alongside them. 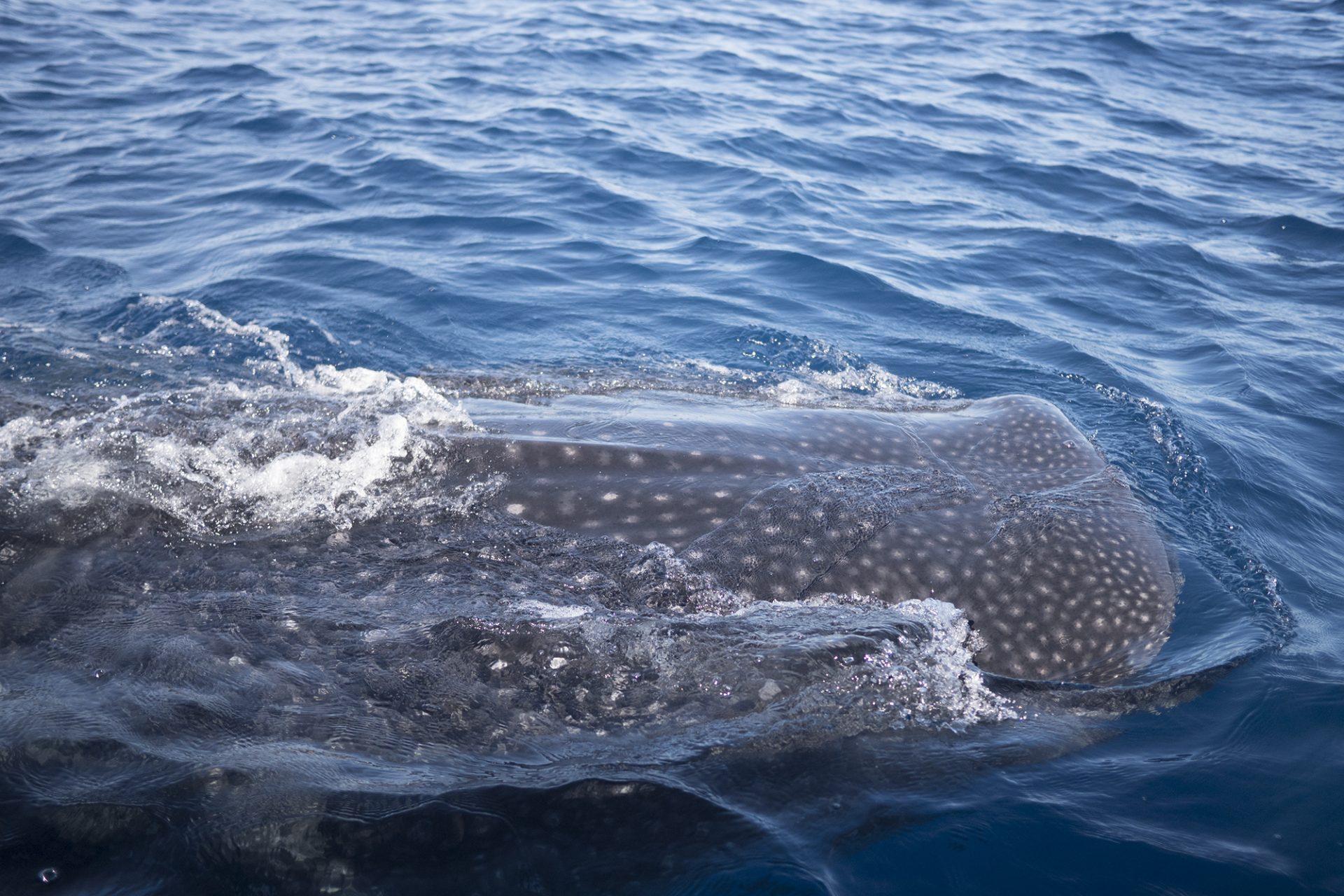 The water was so blue and clear you could see many meters out into the ocean. At one point, one of the whale sharks we were swimming with actually collided with another as they swam into each other. 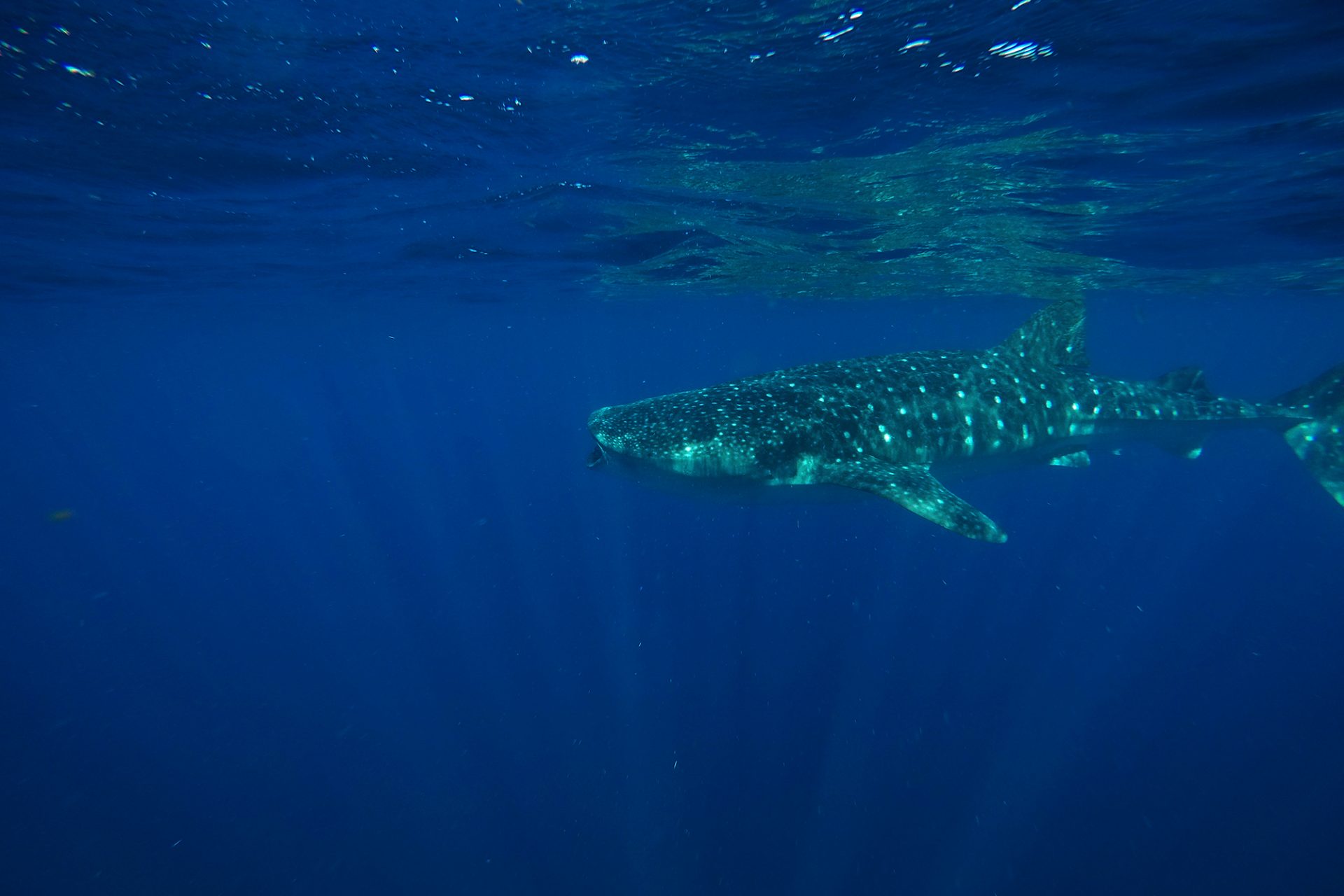 You’re definitely not allowed to touch any of these animals, but I swam up so close I could’ve reached out and petted its body if I could. I looked one of them in the eyes during my second swim and it was just an unforgettable feeling.

I’ve always had a soft spot for marine animals and am continuing my journey to find ways to contribute to the ocean conservation movement, but this experience has further solidified my love for the amazing animals of the deep blue! Be good to the ocean so that we can continue to see these animals in the years to come, and please please please give yourself the opportunity to swim with the whale sharks of Isla Mujeres during your next trip to Mexico! 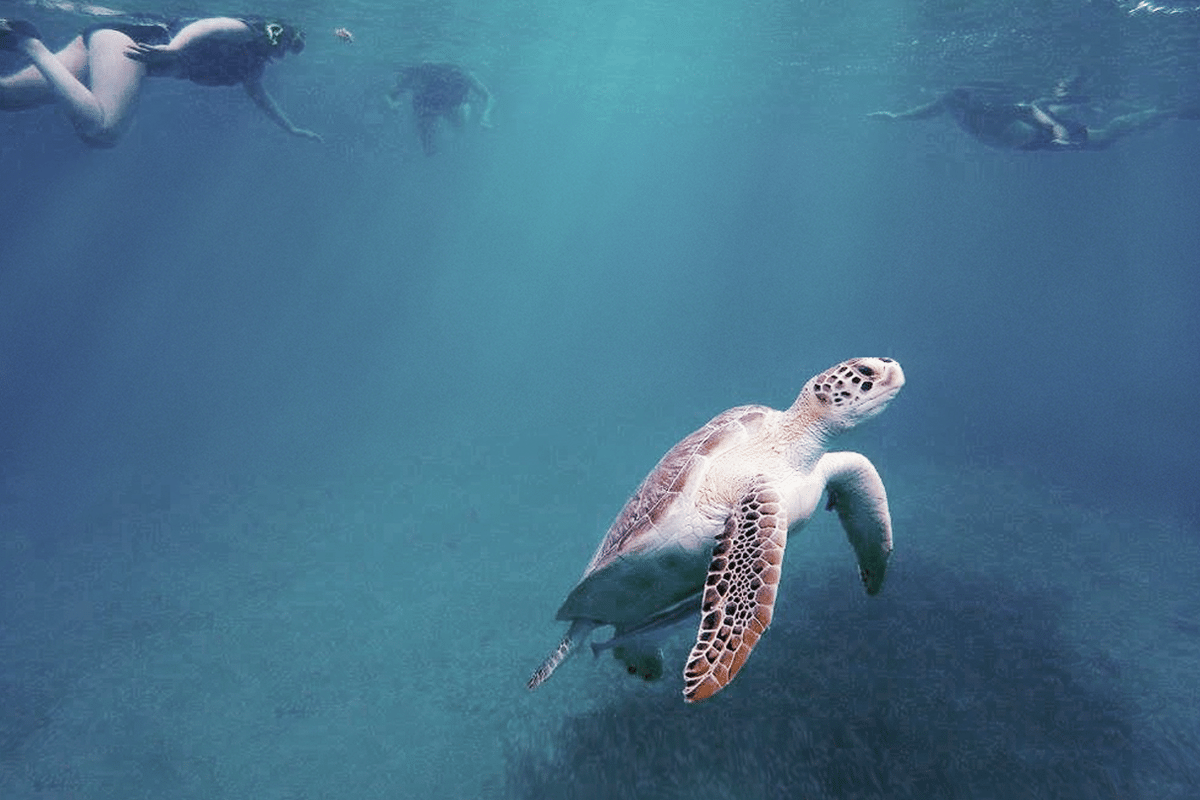 Puerto Rico, Things To Do, Travel