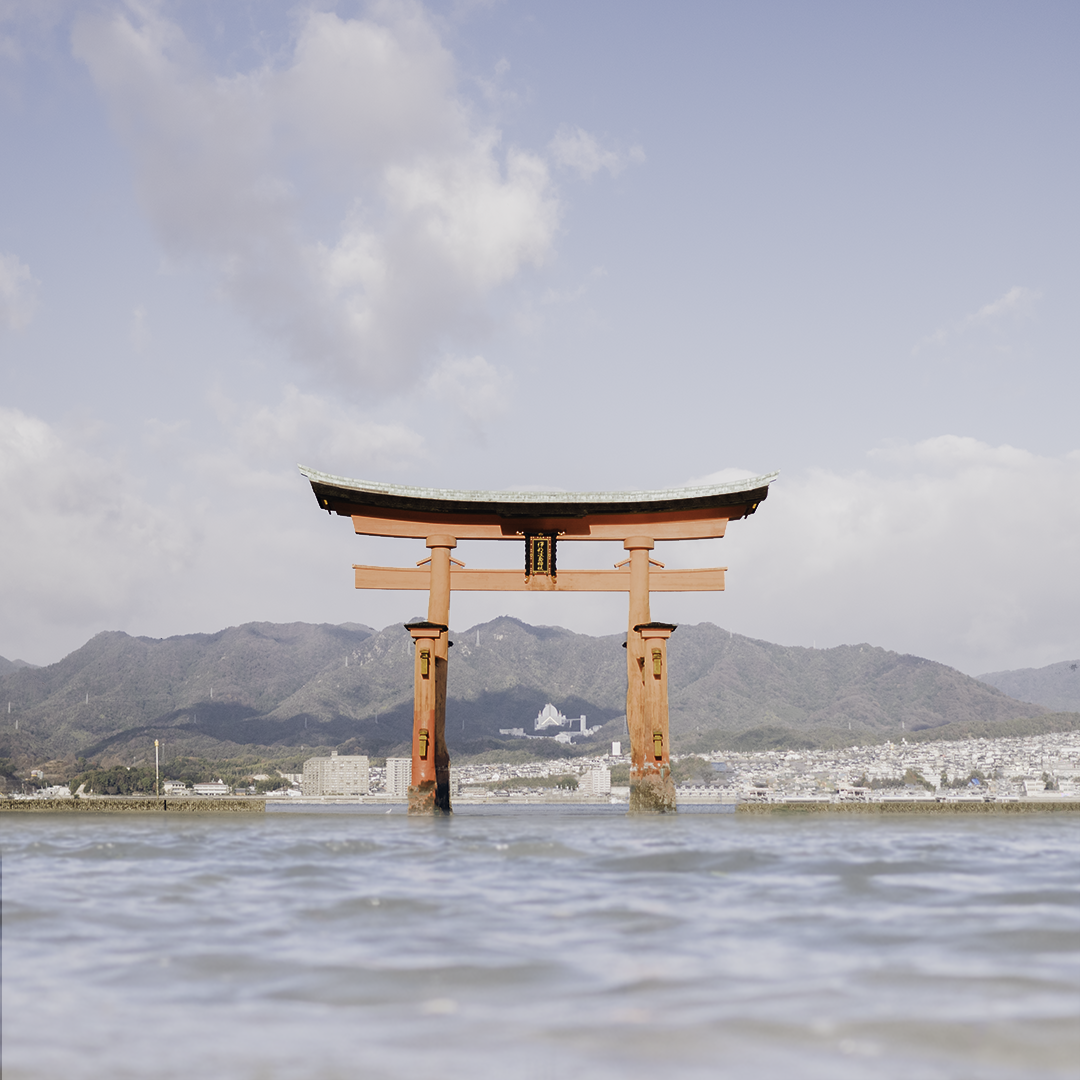 We’re one week into our trip to Japan, and we finally made it out of the Tokyo area to see another prefecture. Our last two trips here were too short to leave Tokyo; staying for two weeks finally gave us the time to grab a JR pass and take a bullet train tour south of Tokyo. Third time’s the charm!

First up on the list for us was Hiroshima. Widely known as the first city in the world to be attacked by a nuclear bomb, it’s a popular tourist attraction, especially for westerners. We decided instead to visit the island of Miyajima, known for the Torri shrine and beautiful Shinto temples. 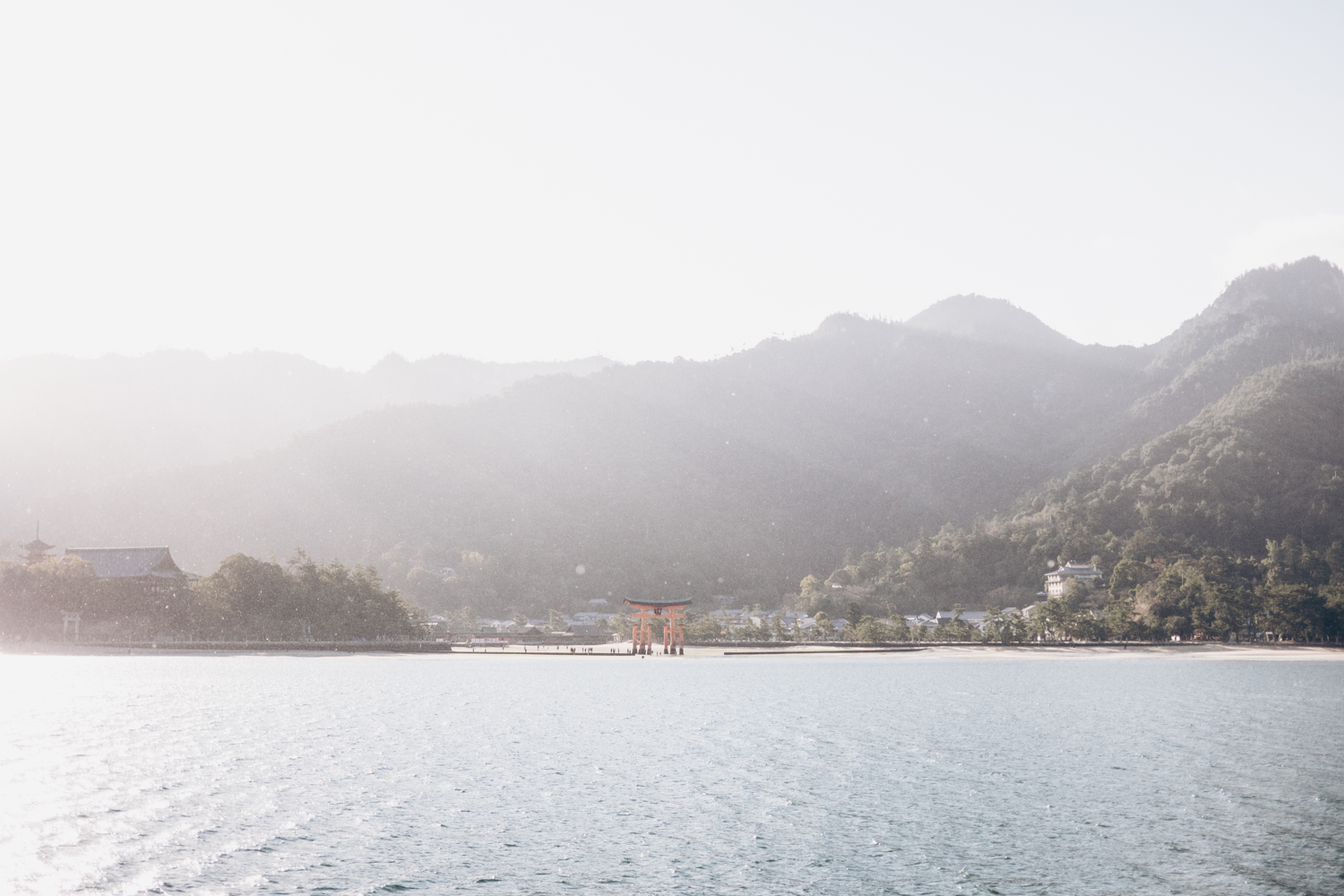 We stayed at a hotel attached to the Hiroshima Shinkansen station, which made things easy as we used the train to get to Miyajima. Hiroshima’s Shinkansen station has plenty of restaurants and omiyage shops, so using it as the central hub was extremely convenient. Hotel Granvia was our accommodation of choice and I’d highly recommend it!

We purchased a 1 week JR pass for our trip this time around, and thankfully Miyajima is easily accessible with the pass. Simply hop onto the Sanyo Line at Hiroshima station and take it to Miyajimaguchi, which takes about 30 minutes. At Miyajimaguchi, follow the signs to the ferry and hop aboard by showing your JR pass. Once you board the ferry, you’ll probably be able to see Itsukushima shrine already. In less than 10 minutes, you’ll dock at Miyajima. Easy peasy!

During the short 10 minute walk from the pier to the shrine, we came across a few friendly deer. Deer are considered sacred in the Shinto religion, and these wild but tame animals casually stroll around the island. You can easily pose for a photo with them, but there are signs everywhere to not feed them. 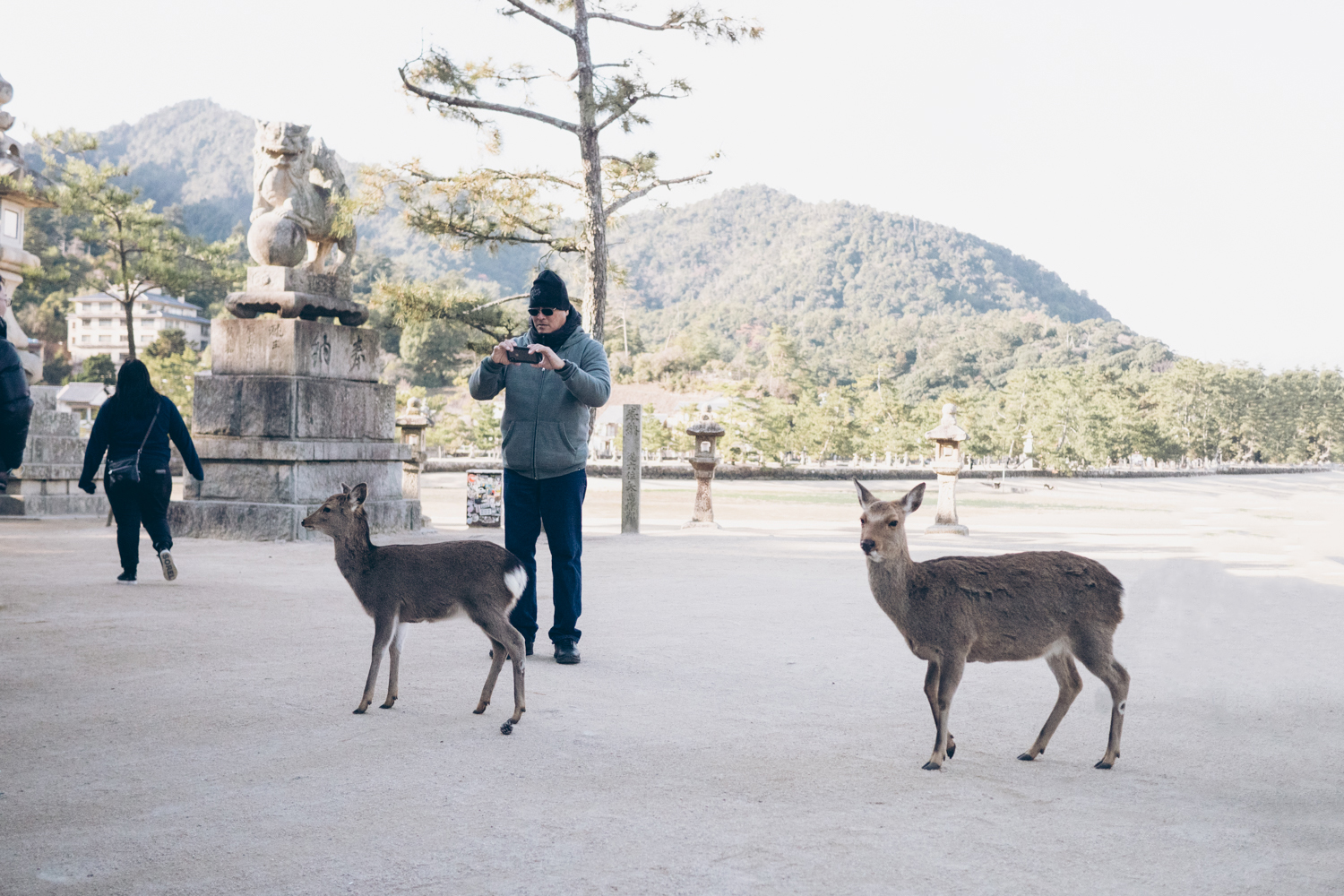 We set out from our hotel at 8am and had only a handful of peers on the ferry. Arriving at Itsukushima around 9am during low tide, there were maybe a couple dozen others taking photos by the shrine. Depending on whether you want to see the shrine during high tide or low tide, you can plan your day by checking out Miyajima’s tide tables. 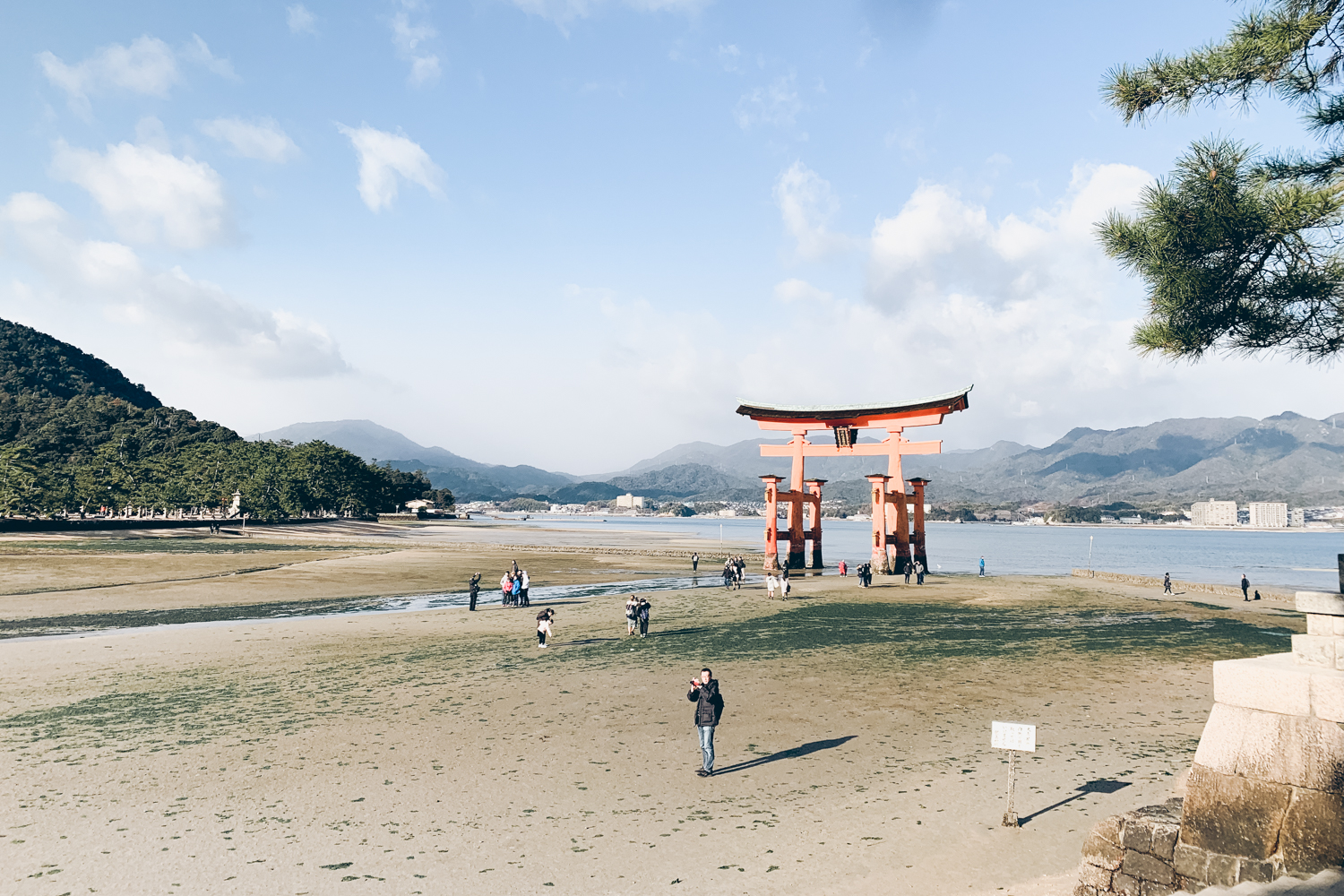 Because we arrived during low tide, we were able to walk up to the base of the shrine which was covered in barnacles. Tons of coins were littered on the ground and even wedged between the barnacles, left over from visitors wishing for good luck during high tide.

After checking out the shrine, you can visit the Shinto shrine that the “floating” Torii gates open up to. 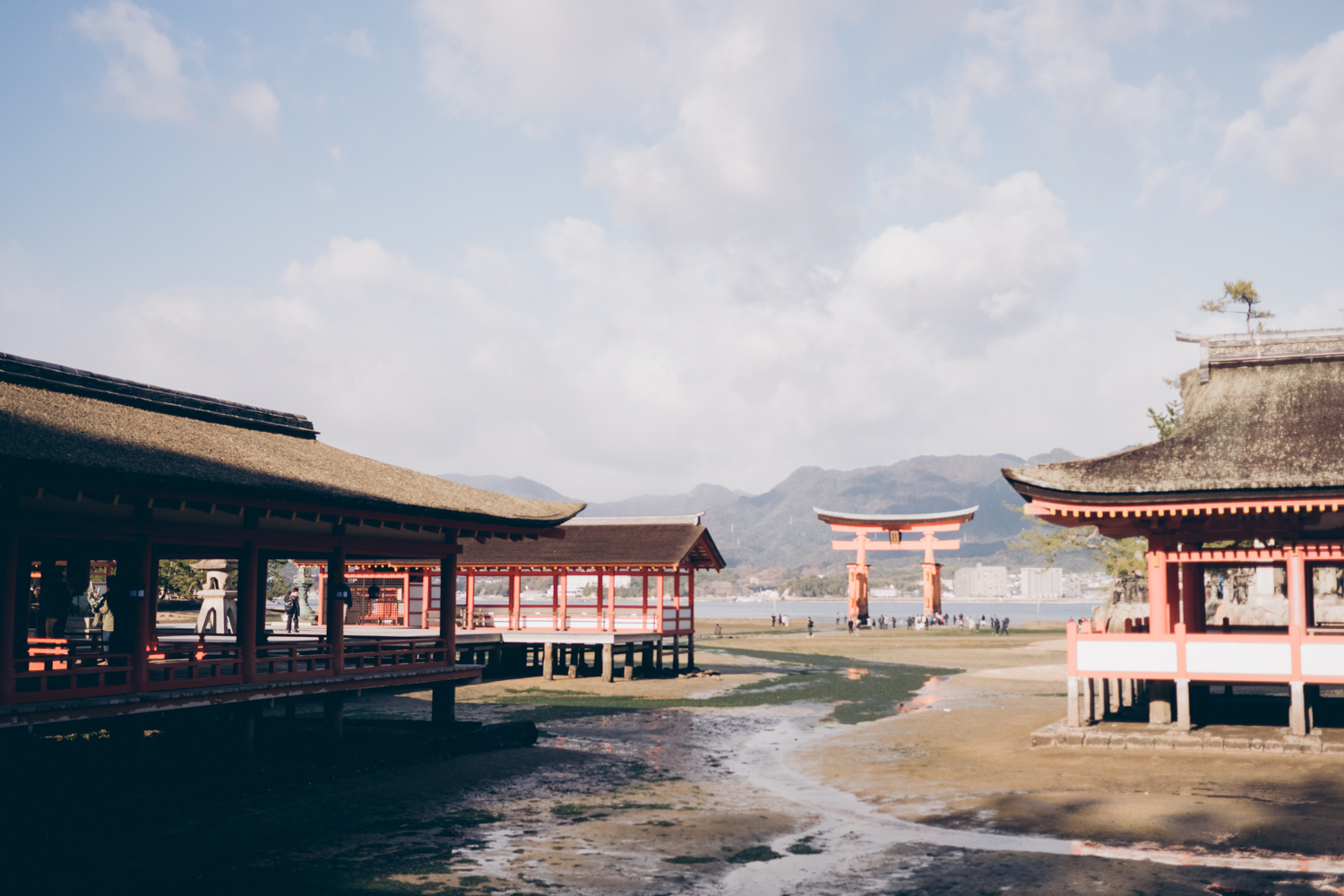 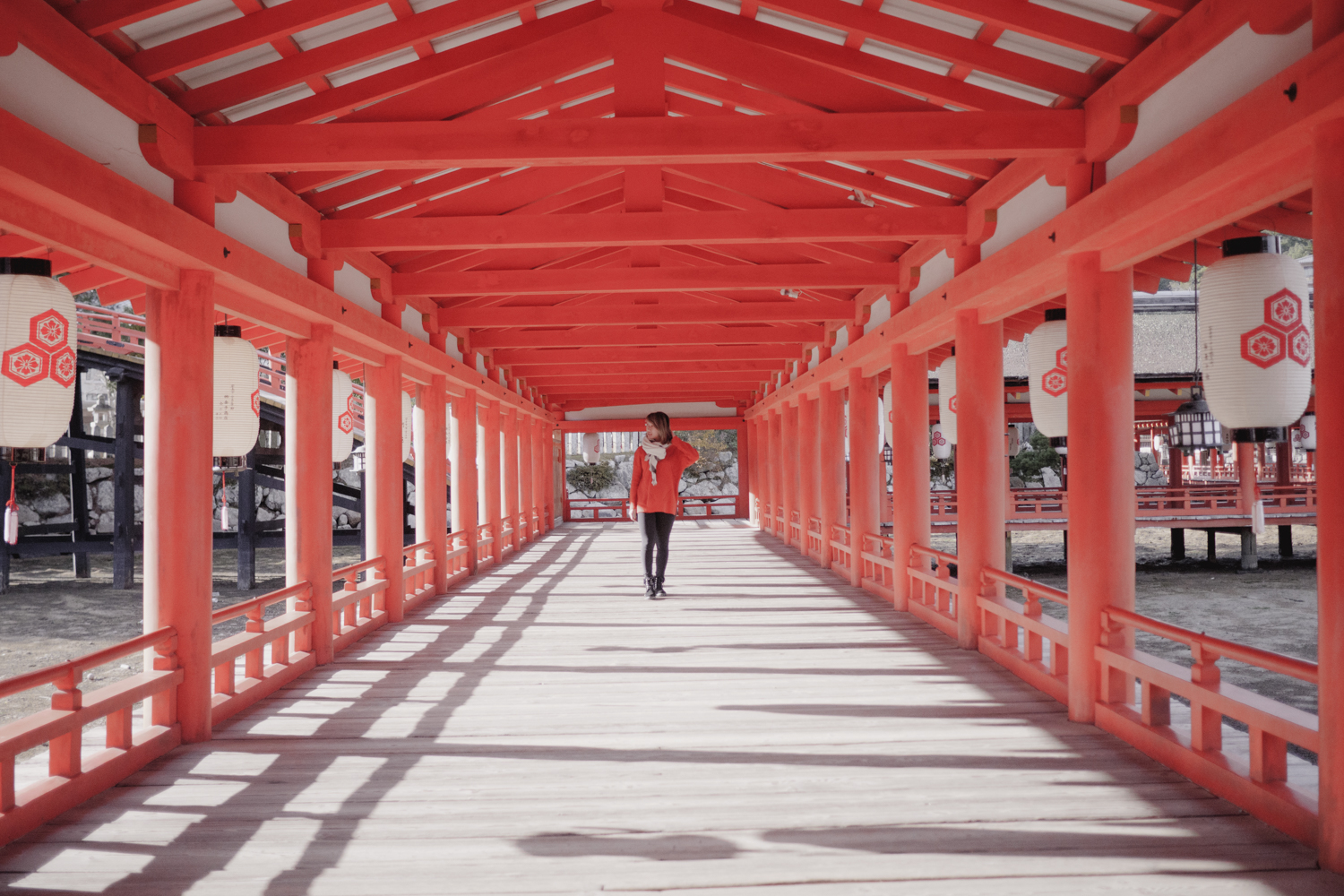 Inside, you can thank the gods for a good year and try your luck for next year’s fortune. Just drop in 100 yen, shake the wooden container, and pull out a stick with your number on it. In the corresponding drawers next door, you can pull out your fortune and take a look. It is all in Japanese, so get your translator ready!

For lunch, we stopped at one of the restaurants just outside the shrine. Hiroshima is known for its oysters and anago (ocean eel), so we ordered the fried oysters and eel bento set. Anago is much less fatty than unagi and made for a delicious midday meal! 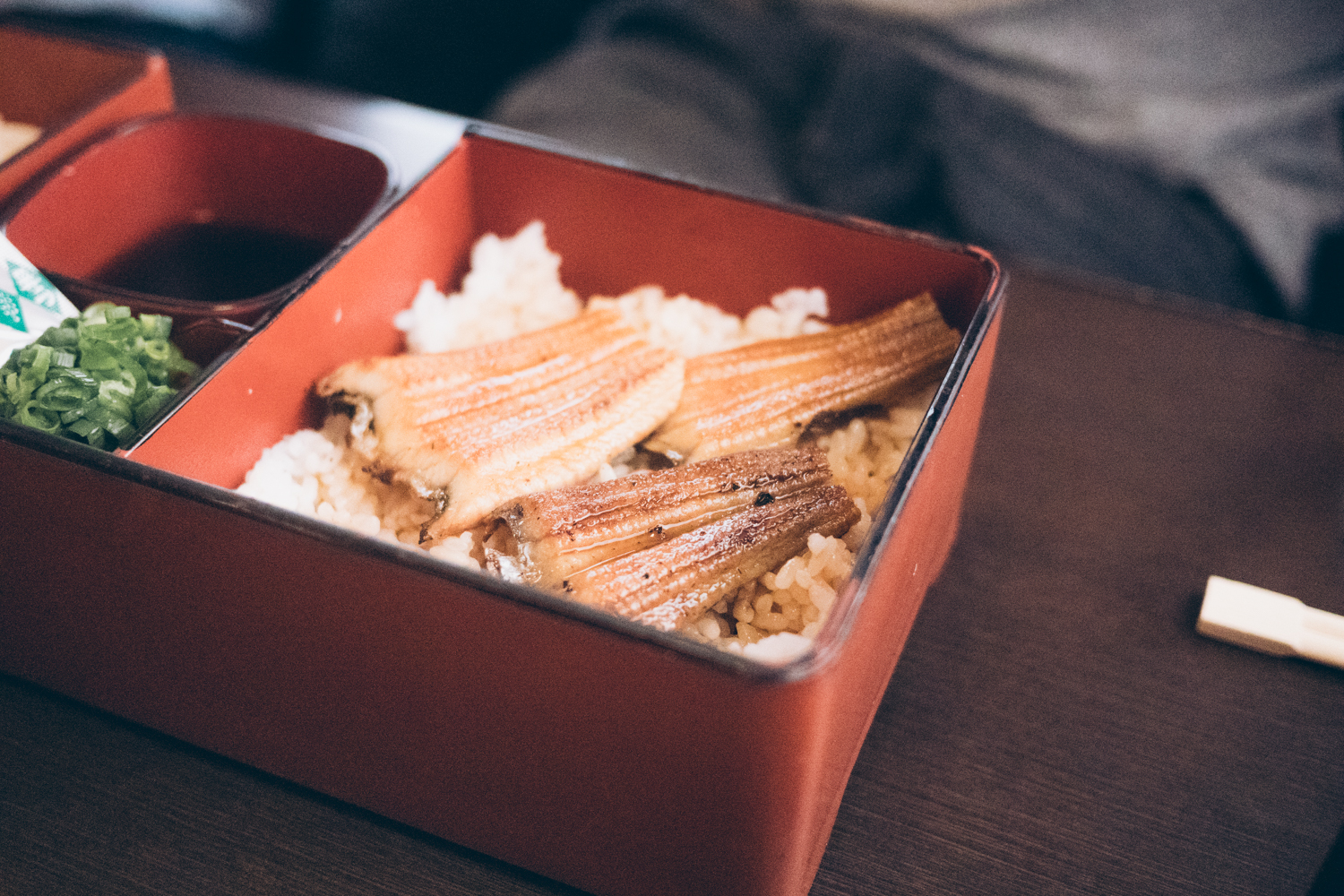 Just before heading back to Hiroshima station, we checked out Torii Shrine one last time. By the time it was 11:30, the tide was high and you could no longer walk up to the gate. It’s pretty magical to see the huge structure turn into a floating shrine.

On our way back to the ferry, you will pass by a ton of shops to purchase omiyage and momiji-manju, Hiroshima’s unique dessert. The outside cake is almost like a waffle and usually shaped like a maple leaf, while the inside is filled with a variety of sweets like custard, peach jam, chocolate, or red bean. 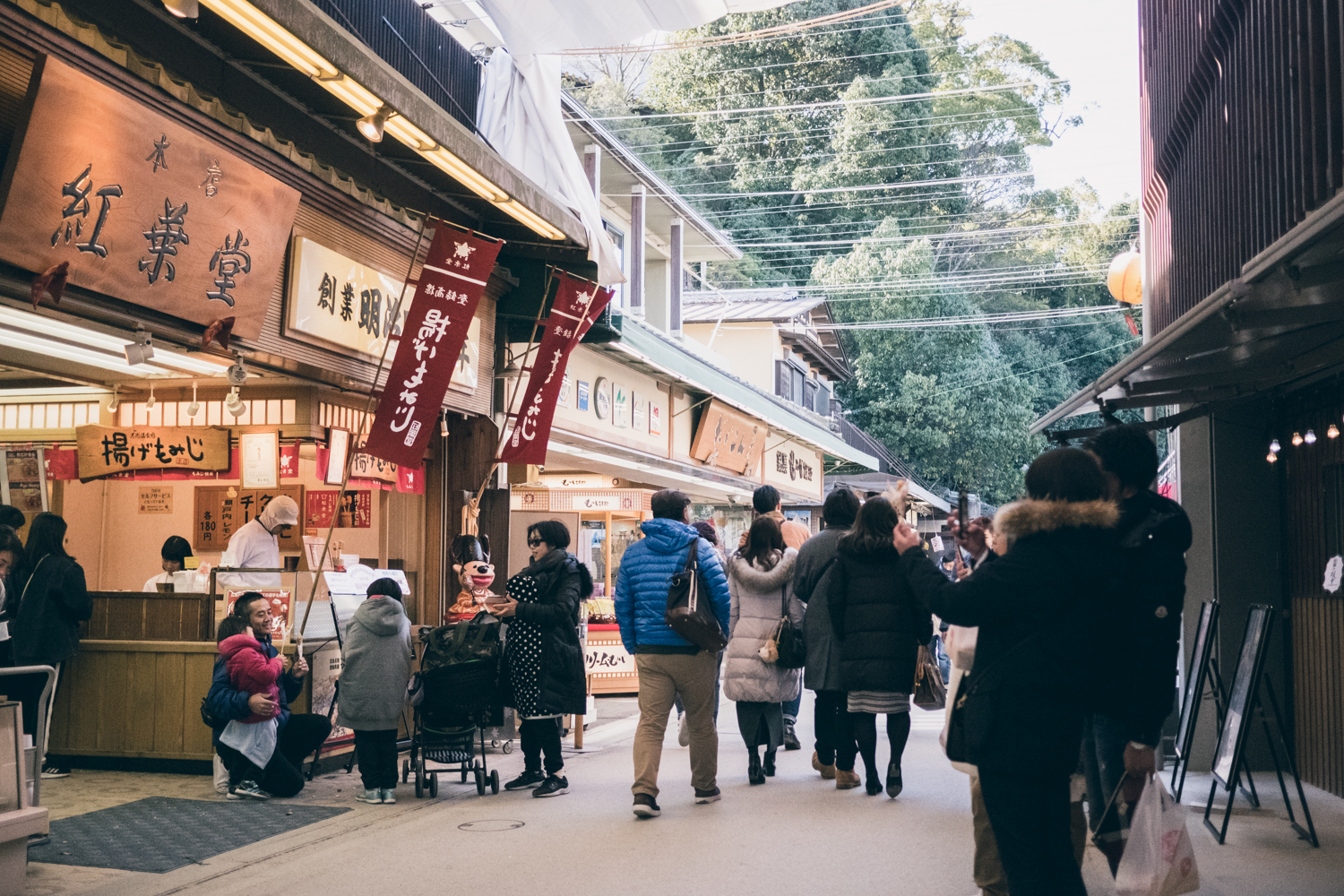 In just half a day, we explored a good portion of Miyajima and got to see Torii Shrine both at low and high tide. Tomorrow we will be in Kyoto, so stay tuned for more updates!