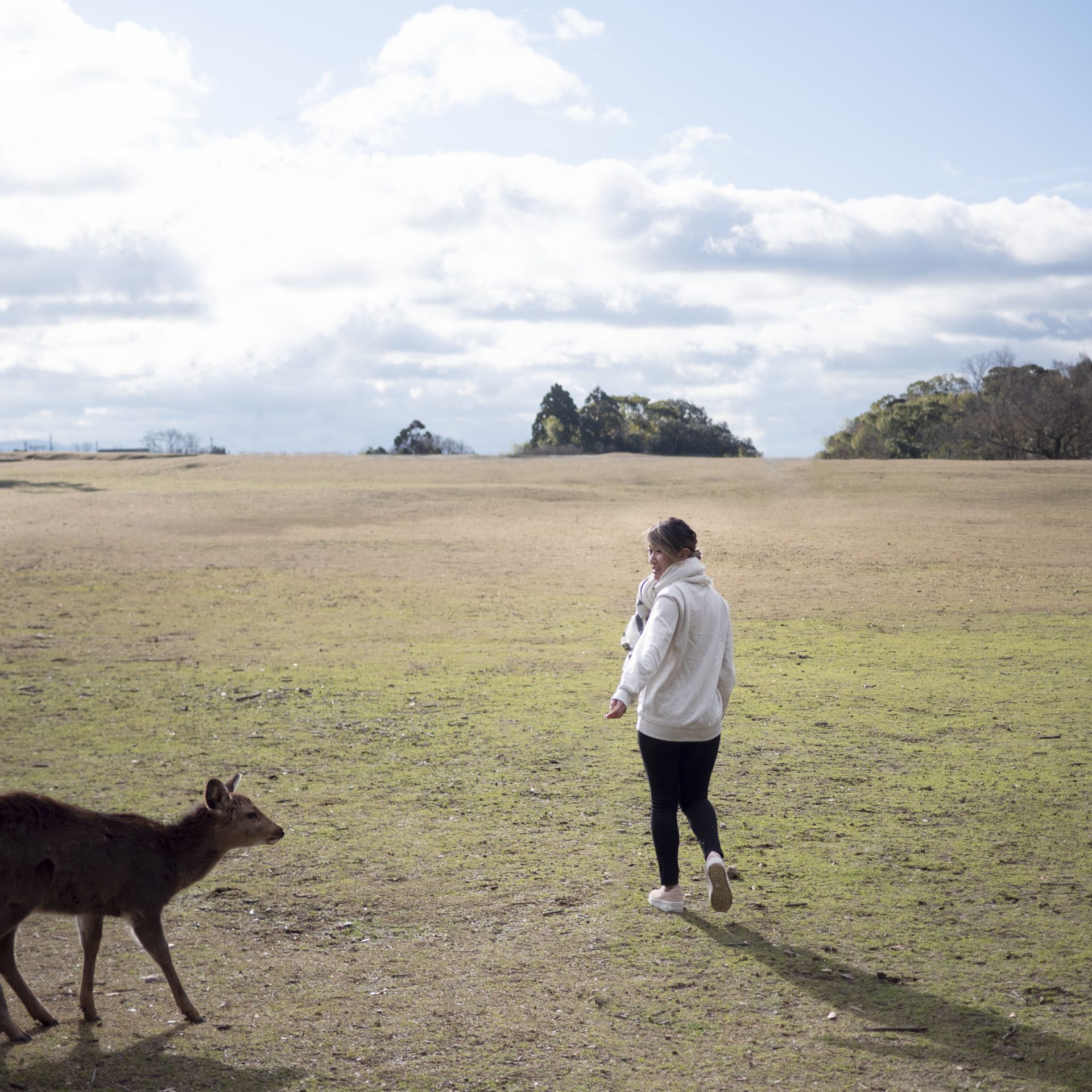 As a huge animal lover, I always look for things to do while traveling that involve experiences with animals and that are unique to the culture of the place I’m visiting. In Thailand, that meant volunteering at an elephant sanctuary and learning more about how elephants fit into the history and tourist culture for those people.

In Japan, deer are considered sacred animals, but can be found living comfortably close to humans in a variety of different places. We saw them first in Hiroshima wandering on the island of Miyajima when we visited to see the Itsukushima shrine.

Then, our JR pass took us to western Japan where we stayed in Kyoto and took a few day trips out to neighboring prefectures. Yesterday morning, we took a train to Nara and arrived at Nara Park around 9 am. (Protip: take a taxi from Nara station and ask them to take you to Nara Park, not Tōdai-ji where most of the tour buses land). 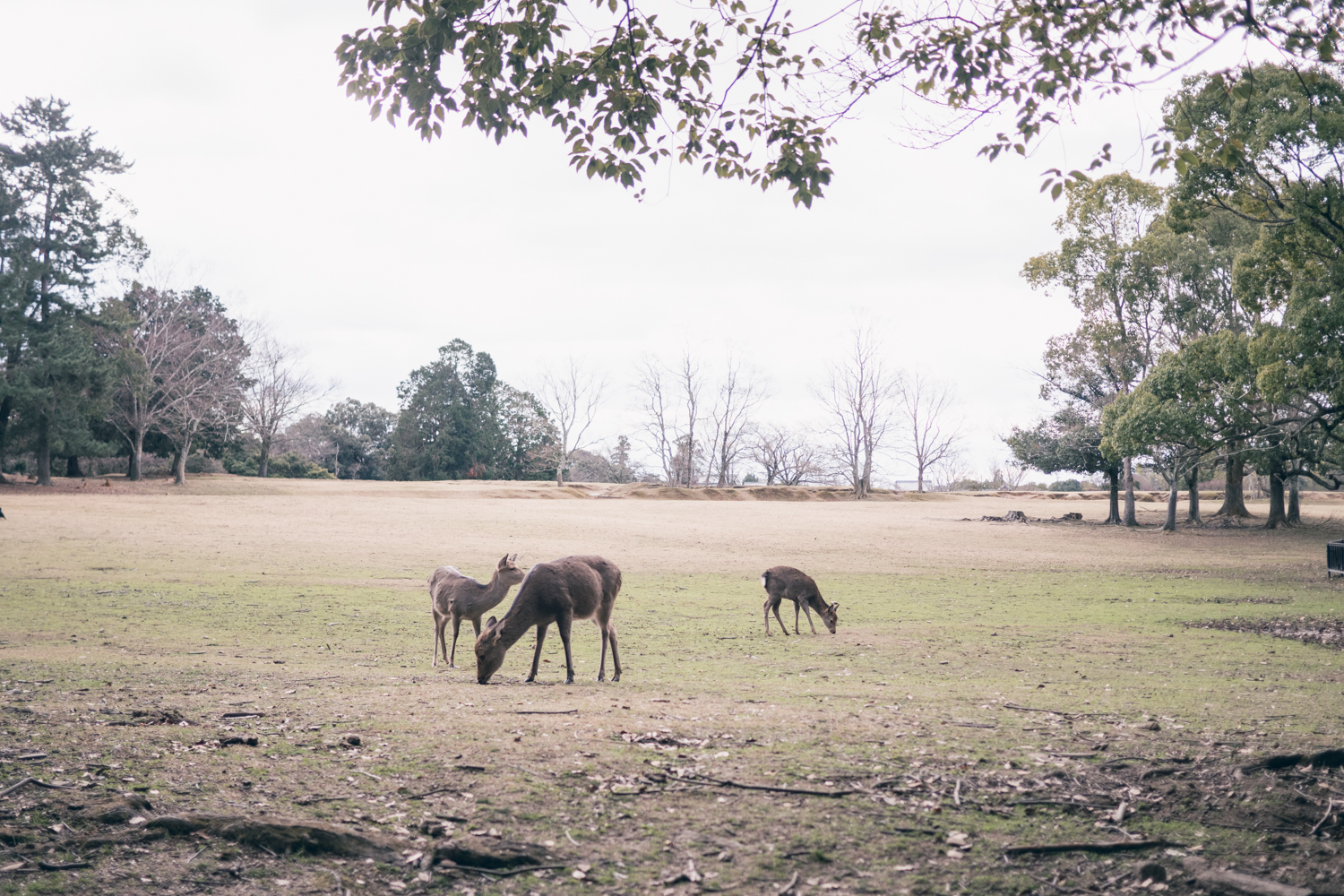 Nara Park is a public park but is most well known for the approximately 1,000 semi-domesticated deer that live in the area. As soon as you arrive, you’ll see a bunch of deer just chilling around the park… grazing in packs, taking naps by tree trunks, you name it. 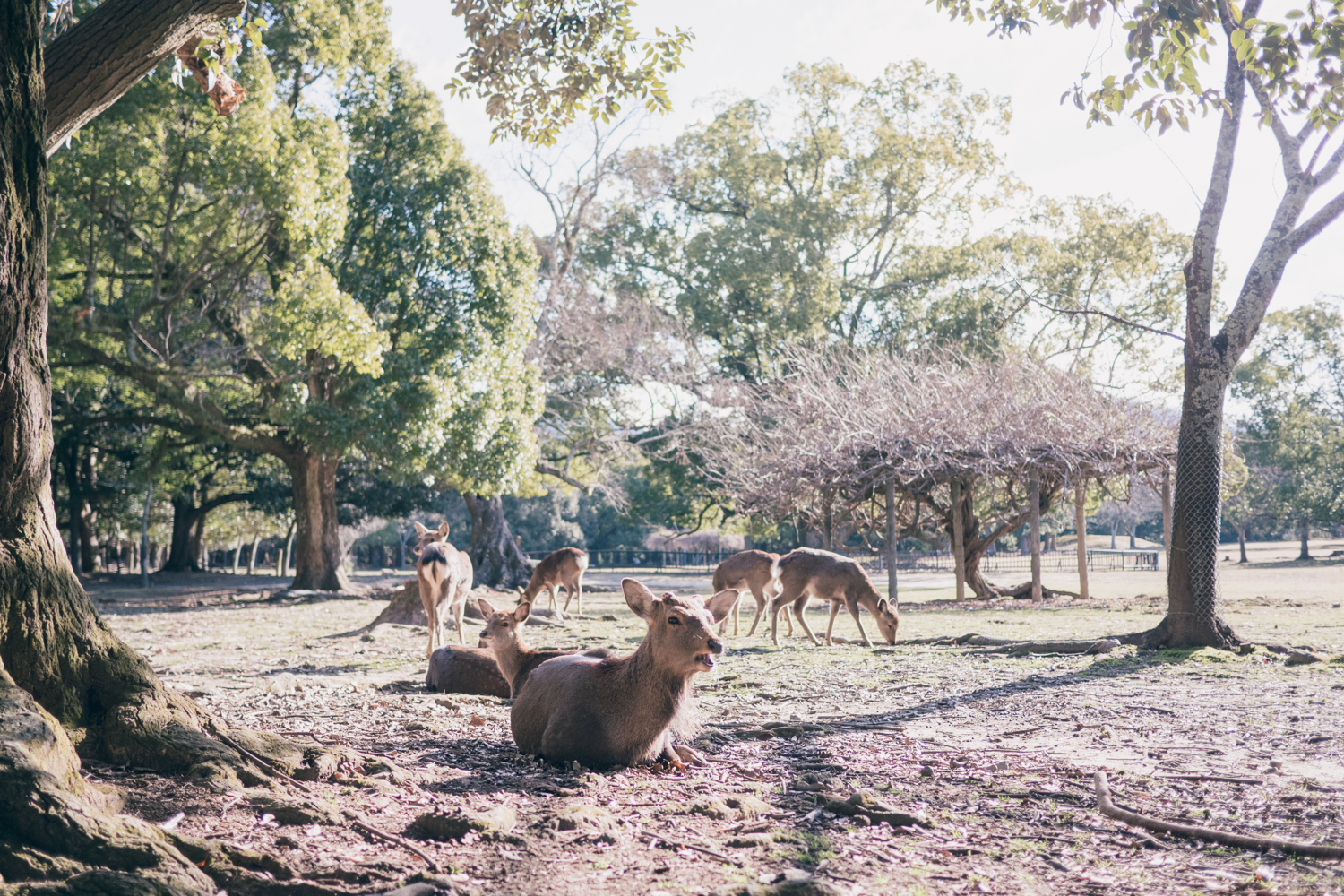 Vendors sell deer crackers (or “shika senbei”) that you can buy for 150 yen each to feed the animals.

As soon as a deer spots you exchanging your money for a pack of crackers, he’ll start walking towards you from however far away he is. These deer are super accustomed to people feeding them. They want their deer crackers, and they want them now! 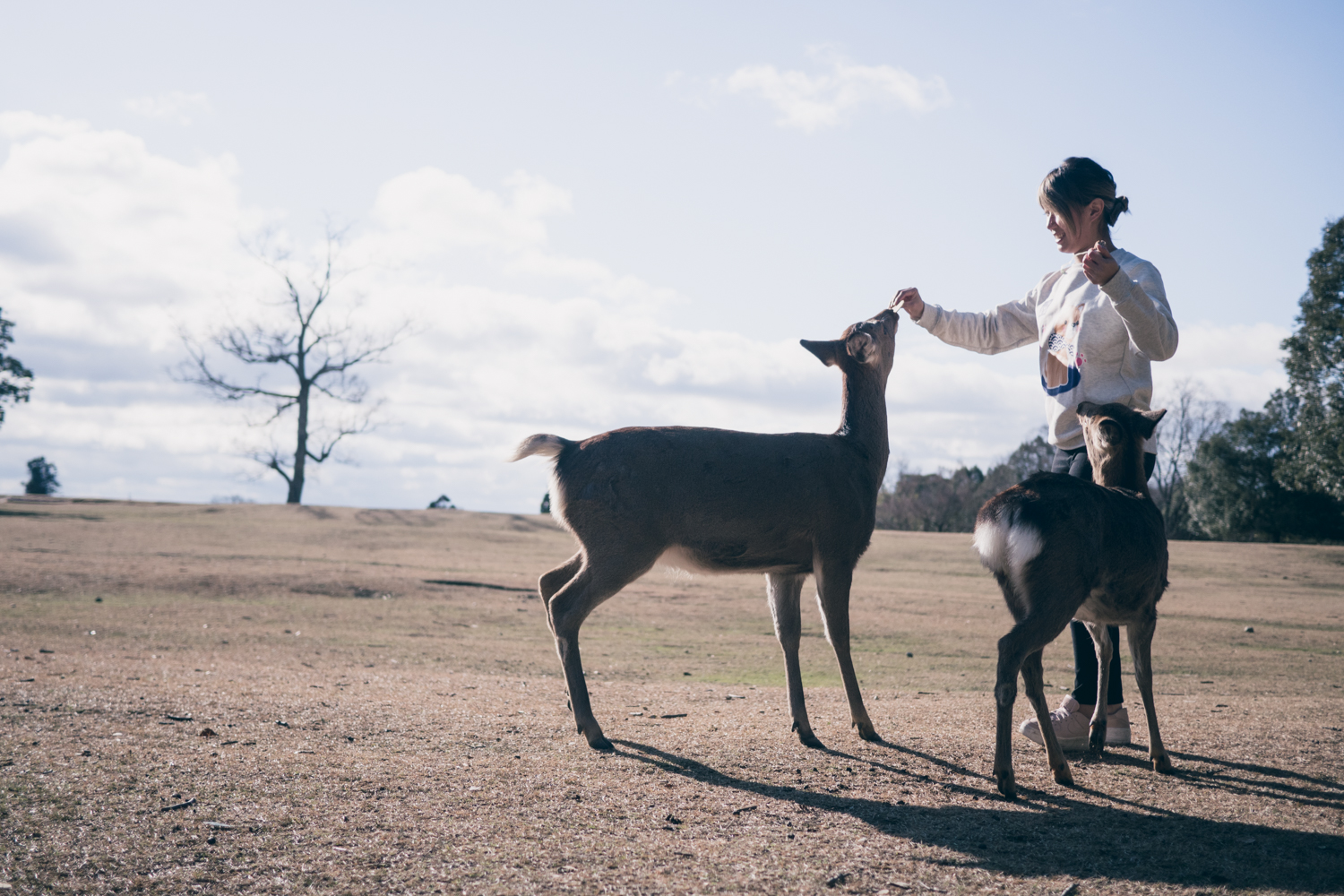 As soon as you start feeding one, others will start coming over and nudging you to feed them a piece of cracker as well. 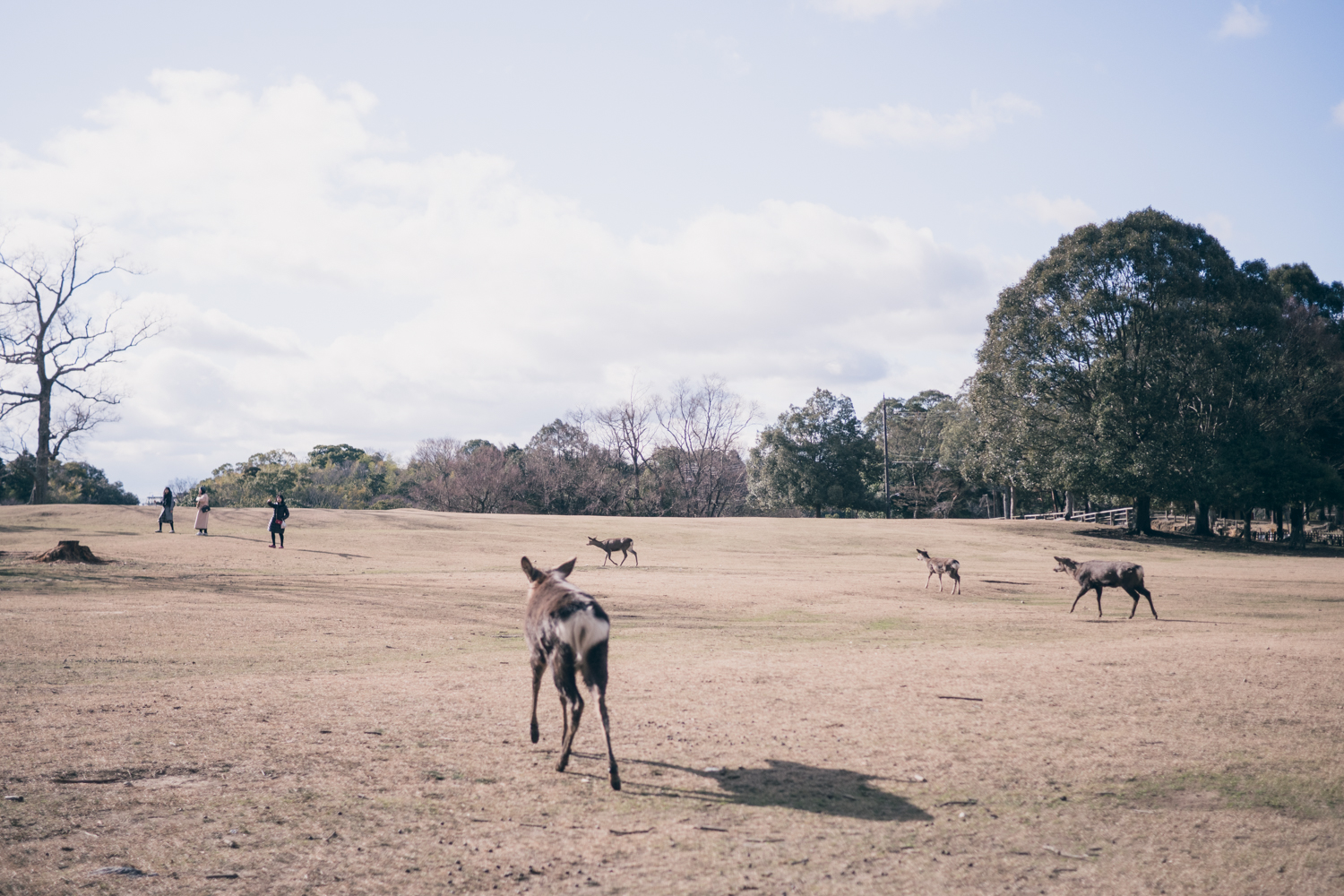 They are not afraid to let you know what they want, and the males will even headbutt you a little or try to take a bite out of your jacket pocket. Don’t worry, the bucks actually have their horns removed during a traditional antler-cutting ceremony every year that began in the 1600s as a way to protect the park’s trees and allow the people and deer of Nara to live peacefully together. 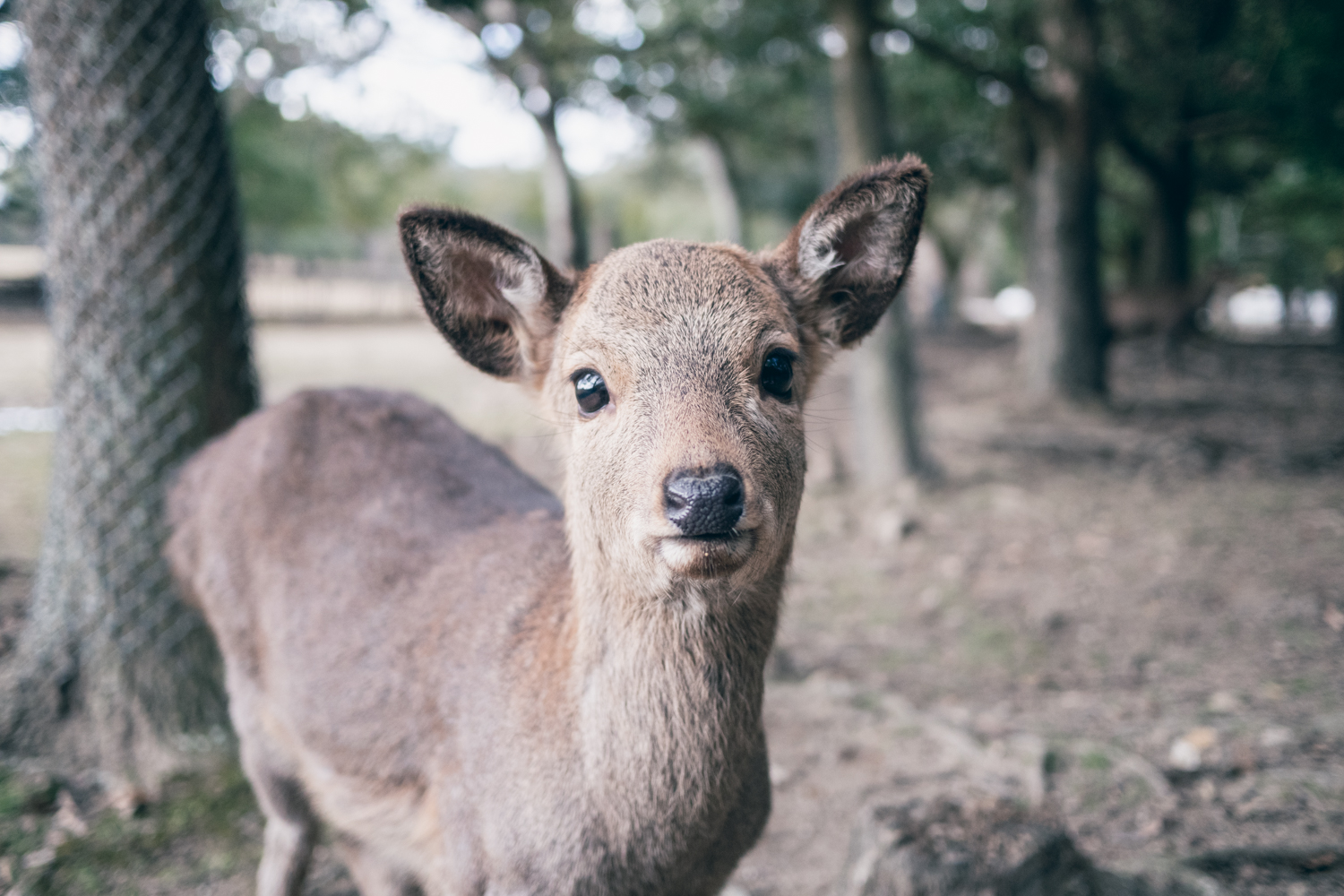 We were lucky enough to see some baby deer, and look how adorable they are! These little guys are a little more wary than their adult counterparts, but they definitely don’t seem to have any fear of people and even allow you to pet them in exchange for a couple delicious bites of deer cracker. 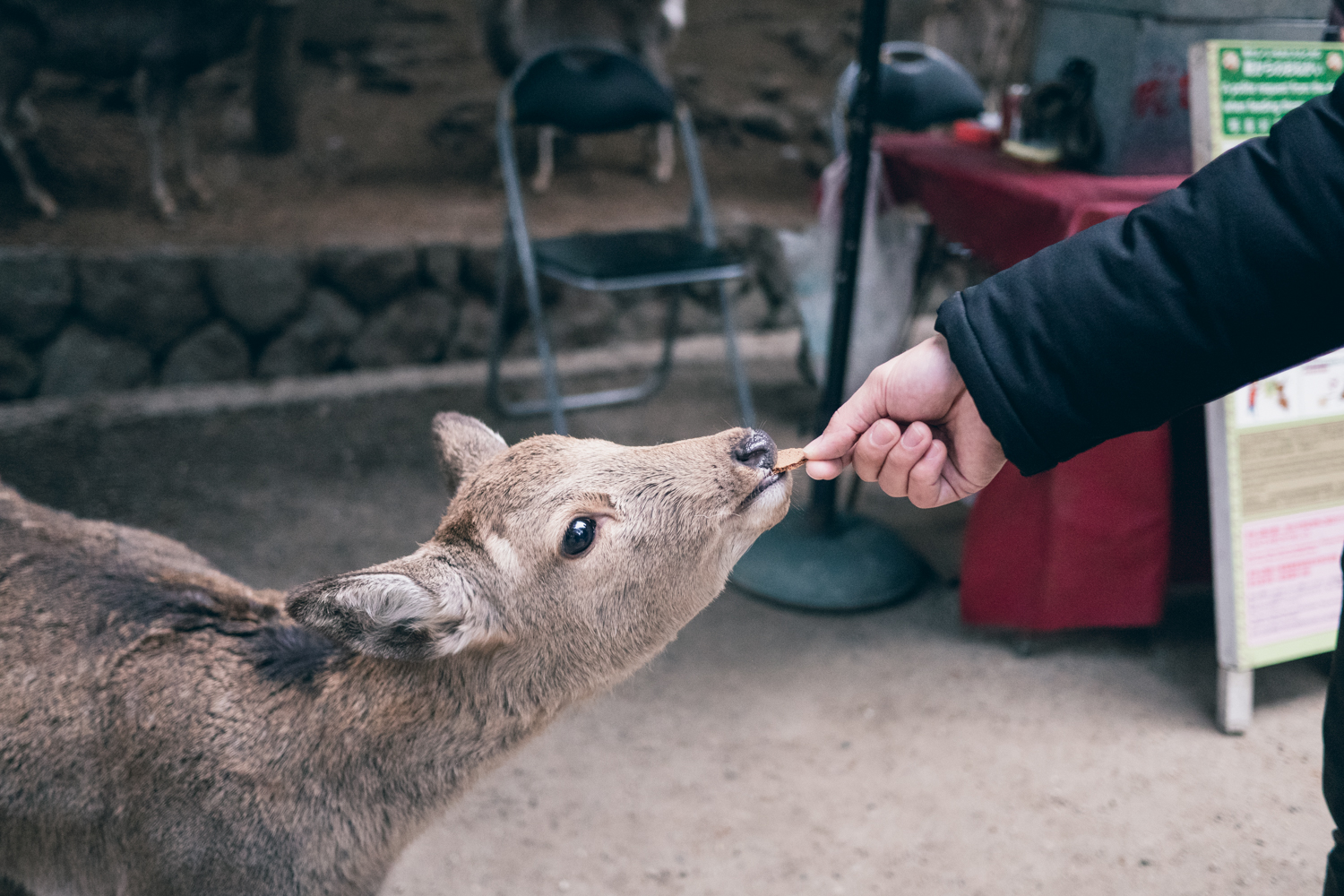 The deer even seem to bow “please” and “thank you” when you feed them.

As you walk throughout the park, deer (and tourists taking selfies with them) can be seen everywhere. There are even

You can even befriend one and get them to follow you throughout the park, but as soon as you run out, their loyalty disappears and they’ll be off chasing the next human with cookies in their pocket.

We spent a few hours slowly ambling through the park, feeding a deer here and there and ultimately arriving near Todaiji Temple, a Buddhist temple teeming with tourists by the time we arrived. Arriving early in the morning and traveling from Nara Park towards the temples turned out to the perfect move as we avoided the huge crowds and got to hang out in a more natural environment with these friendly Japanese deer.